Travels through Sicily and the Lipari islands, in the month of December, 1824  di Edward Boid 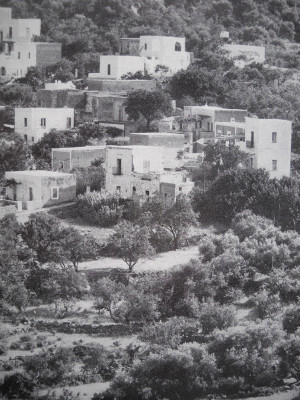 “From Stromboli to Lipari it is about ten miles, with the intervening islands of Panaria, Datolo, Baziluzzo, and Lisca. The wind seemed quite propitious to our adventures, for having drawn round to the northward, we were again enabled to make use of the sails, whilst our mariners entertained us with songs, which they sung in parts with considerable taste and effect: with one we were particularly pleased, a hymn addressed to the Virgin, which seemed to call forth a great deal of religious pathos and solemnity; the air was simple and plaintive, which they chauntcd with a degree of harmony and expression I could little have expected from persons of their condition.
Panaria, according to Plato and Ptolemy, is the Eunonymus of the Greeks, and the Thermisia of the Romans, who so styled it on account of the hot mineral waters it is remarkable for. It is about six miles in circumference, with a fine fertile soil, which is cultivated by two hundred inhabitants, and produces an abundance of grain, fruits, and oil.
We landed at a little port on the south side, called Cala del Castello, from an old Roman castle, of which some vestiges still remain. During the time of the Romans it was a place of great importance, which has been proved by the discovery of numerous fragments of antiquity; and the island is peculiar, as being the only one possessing a yellow sandy beach in the whole group of the Liparis.
The other islands lie to the east, and south east of Panaria, and were anciently called Heraclidae, but in more modern ages, Datoli, on account of their similarity to a bunch of dates; however, one alone now retains the name, and is situated about a mile east of Panaria. It is merely a white precipitous uninhabited rock, but favourable, I imagine, to the industrious pursuits of the bee, since the Panarians keep their hives there, and derive from them considerable quantities of honey.
Two miles and a half to the east of Panaria lies Baziluzzo, the Ikejia of the Greeks, and Hicetium of Ptolemy. It is nearly two miles in circumference, with steep rocky sides, which render it difficult of access. A very ancient flight of steps, hewn out of the rock by the Romans, to facilitate the approach, may still be seen, together with many other traces, that serve to identify its antiquity.
It is inhabited by two or three families, who cultivate its productive soil, in spite of the myriads of rabbits that war against their industry.
Lisca Bianca, situated a mile from Baziluzzo, is a small island, kept in cultivation by the Panarians, with two sterile rocks to the southward, called Lisca Nera (nota: chiamata anche Tila-Navi), and Bottaro, from the latter of which sulphate of alum is frequently collected in large quantities.
These islets are extremely remarkable for the heat of the surrounding waters at a considerable distance below the surface, and the sulphuric bubbles that are frequently observed rising, which afford strong testimony of the active operations of the volcanic fire beneath.” (pagine 308-309) 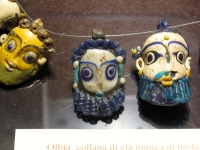